When I logged into Facebook today, one of the ads on the right hand side (the ones that don’t get blocked by adblock), grabbed my attention.  Normally all of the ads are pictures of girls with the caption “Am I Your Wife” or “Meet Hot Girls” or MLM pyramid schemes.

This ad said “Get your Obama Check” with an obviously photoshopped picture of Obama holding a government check over the bottom half of his face.  The caption said “The government is giving away billions of dollars to stimulate the economy.  Find out how I got $12,000.”
I clicked on the link because I was curious to see if this was in any way, shape or form associated with Obama.  I thought it wasn’t, but since the Obama campaign was the most tech savvy and used social networks the most in the history of politics, I thought there could be a possibility it was a new Obama program to reach Facebook users.
The first link led me to a “blog” by a guy who claimed to be from Chicago, named Tom.  It is one of the fakest looking blogs of all time.  He claims that he got 12k from the government, allowing him to pay off his 10k credit card debt, take a 1k vacation and save 1k.  All this occurred within 30 days of him asking to government for money.  He says:

My name is Tom and I am from Chicago, IL.  After hearing all the news on the Government Bailout of the banks and the possibility of an Auto industry bailout, I decided there had to be a way for me to get some money like that from the government. Because if anyone needs a bailout, it is hard working Americans like myself, who have a hard time keeping their head above water.  After Doing some research I found that the US government has all kinds of free grants available to the public, for all sorts of reasons, that often go unclaimed. And these grants are not loans, they are checks you never have to pay back, funded by different government agencies. And if they don’t give what they were budgeted, they actually get less money the following year. So these government employee processors are just approving application after application, especially if no one is applying for these financial aid programs. So after researching on Yahoo Answers, I found a program that helps guide you through the process and I signed up for Goverment Funded Grants.

But most importantly I want to help other people get the money they are entitled to and not stand by while all these fat cats from large companies get rich off government bailouts. We all deserve to live debt free, so I am glad I signed up.

At the end of the “blog” you can click on a link that takes you to a page that prominently features Obama.  It asks you to sign up to receive info on how to get your free cash.

Beyond the obvious idiocy of these claims, its amazing that the Obama administration allows these people to use his image so prominently.  First it was drug dealers, now its people trying to capitalize on the recession and America’s laziness and desire for get rich quick solutions.  It will be interesting to see if Facebook continues to run these ads or if anyone protests their inclusion of Obama’s face.  You would think that at least one of President Obama’s zealous college student supporters would have reported this by now.
EDIT: Forrest commented below saying that the site uses IP locations to change where “Tom” is from based on where you are browsing from.  Shady.  I still see these ads on Facebook and the “get your obama check” websites are still up.  Secret Service, what’s up?

Sprint must be the dumbest cell phone company around right now.  First, they have those black and white ads with Dan Hesse, their CEO, walking down the street.  Who is going to buy a cool phone because the CEO tells you about the company?  I can answer that.  Nobody.  They also have that annoying classical music playing throughout the commercials.  You can see it here:

I decided to watch 24 on Fox’s website since I missed last week’s episode because I was working.  This is a great idea and a great service, especially for a series like 24, where it is essential to see every episode in the correct order so that the show makes sense.  The only problem is that Fox has to put commercials into the middle of the show.
I understand completely why they need to do it and it makes perfect sense, but the execution is curious at best, moronic at worst, which brings me back to Sprint.
There are 7 commercial spots during a 43 minute episode of 24.  For whatever reason, Sprint and Fox decided the best way to advertise would be for the same company to put the same ad in all 7 spots.  This is a horrible idea in the first place, but its even worse when the 7 commercials are all Sprint’s horrible commercials.  Not only are the commercials bad, but they are also ironic.  The phone they are advertising is called the Rant.  Whoever named that phone must have had this commercial in mind because that’s what it inspires: Rants.
By the 3rd commercial break, I vowed I would write a Rant in my blog.  By the 5th, I decided that I would never buy a sprint product and would look to watch 24 any other way possible, including the myriad of pirated broadcasts.  By the 6th, I was about to break my computer and by the 7th, I was thinking to myself that I wouldn’t complain if Mr. Bauer had to use some of his tricks of the trade to get some info out of Mr. Hesse.  Luckily for Mr. Hesse, my computer and me, there wasn’t an 8th commercial break.
I do not know what both Sprint and Fox were thinking, but whatever it was, they failed miserably.  Not only do I now hate Sprint, but the repetitive commercials are going to drive me away from Fox’s service, onto a different website that does not make Fox any money.  If companies want to continue to make online content like this a viable ancillary revenue stream, they are going to have to learn to continue to adapt.  They cannot show the same commercial, even a great one, 7 times to a viewer in 40 minutes.  It will never work.
Maybe someone at AT&T or Verizon paid Fox to put seven Sprint commercials in a row during 24.  That’s about the only explanation that makes sense.
Here’s the offending ad: 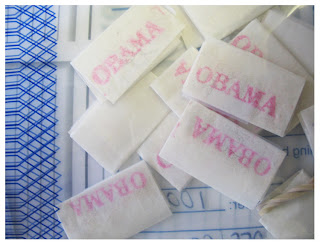 I shamelessly pulled this headline from The Smoking Gun because I couldn’t do any better. Apparently drug dealers in New York were selling Obama brand Heroin. Other brands were “bin Laden heroin,” “Harry Potter Ecstasy,” and “green tinted crack for St. Patrick’s Day.”

Like I said in my previous post, its too bad that these guys’ creativity isn’t being put to better use. Imagine what they could do with a 30 second spot for the Superbowl…

While I probably haven’t eaten fast food in at least six months, Burger King is my favorite burger chain solely based on its innovative marketing.

They are at it again with their Facebook application Whopper Sacrifice.  WhopperSacrifice.com says:

What would you do for a free WHOPPER?  Now is the time to put your fair-weather web friendships to the test.  Install WHOPPER Sacrifice on your Facebook profile and we will reward you with a free flame-broiled WHOPPER when you sacrifice 10 of your friends.

When a Facebook user defriends someone, Whopper Sacrifice notifies the defriended person with a notice that the person likes Whoppers more than them.
This is by far my favorite Facebook Application so far.  It fulfils an actual need, food, and makes fun of all of the quasi-friends that everyone has on Facebook.  It’s incredibly sticky and extremely viral: one user turns into at least 10 users very quickly.
As of today, over 30250 people have been defriended in favor of the Whopper and it is going up fast.  I am surprised that Facebook has allowed this app to continue, as it eats away (pun intended) at its user base.  Even if the Facebook team decides that this app violates the terms of service, it is a publicity coup for Burger King and a strategy that other web companies should emulate.