My favorite charity is Team Rubicon.  I first heard about the team when they were getting their start in the aftermath of the Haiti Earthquake disaster back in January.  Former Marine and UW football player Jake Wood and his friends knew that they had the skills to help the people who had been affected by the earthquake.  They put together a team of ex marines, firefighters, doctors and nurses, organized donations and sent the team to the hardest hit parts of Haiti.

While traditional aid organizations like The Red Cross, The UN and even the US Military were still at the Port-Au-Prince airport making plans, Team Rubicon was in the field saving lives.  It was amazing to see the pictures that Team Rubicon was sending back in real time from the field and anyone could tell they were doing amazing work against long odds.

Team Rubicon brought an entrepreneurial approach to disaster relief.  They didn’t wait for permission, or for bureaucrats to tell them what to do.  They saw people in need, knew that they had the skills to help and deployed.  During Team Rubicon’s time in Haiti, they realized that there was a need for fast acting disaster relief to bridge the gap between the disaster and when the more traditional aid groups could fully provide aid.

Team Rubicon organized as a non-profit dedicated to bridging the gap between natural disasters and traditional aid responders.  They’ve deployed multiple times since the Haiti earthquake, most recently to Pakistan.

Pakistan has had horrible flooding in the past few weeks that has displaced over 1m people.  The flood victims are living in refugee camps, where they are susceptible to diarrhea, cholera, malaria and other waterborne diseases.  Team Rubicon is currently deployed and providing medical care.  Make sure to check out the Team Rubicon site to see some unreal pictures.

Not only is Team Rubicon providing essential disaster relief, they are also some of the best ambassadors for the United States that I can think of.  Like Greg Mortenson of Three Cups of Tea fame, Team Rubicon goes into places where people may not have a favorable opinion of the United States and saves lives.  I have to think that Team Rubicon’s actions speak louder than any of anti-American propaganda out there.

Since they are a non-profit, Team Rubicon are relies on donations to be able to do their work.  You can donate cash or you can buy equipment for the team. They’ve even set up a registry of all of the things that they need to operate and you can buy it for them, which is a great idea.  I think charities would see high donation rates if they showed exactly what they needed instead of just asking for cash.  If charities could show the things that people bought for them in use in the field, I bet donations would go up even more because they’d make the donors feel even more a part of the rescue effort than simply writing a check (or pushing send on PayPal). 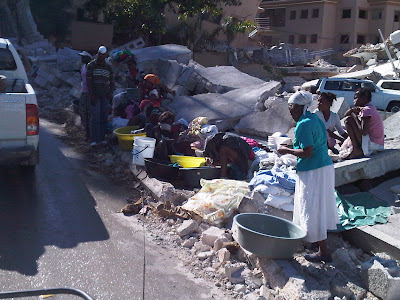 Over the past week, I have been incredibly inspired by Jake Wood and the rest of Team Rubicon’s privately funded relief effort in Haiti.  Wood and his team were fed up with the bureaucracy and red tape associated with providing relief in Haiti, so they took matters into their own hands.

Jake Wood, who is about my age, is a former UW football player who graduated and enlisted in the Marines.  During his service, he completed two tours of duty, one in Iraq and one in Afghanistan and is now retired.  I first heard about Wood when I found his blog, Jake’s Life, shortly after he deployed for the first time.  I’ve been following his blog ever since.

Team Rubicon flew into the Dominican Republic and drove overland into Haiti with supplies donated from people in America.  They quickly got to work helping people survive.

Their blog posts are heart wrenching and amazing, all at the same time.  Many of the pictures are graphic.  One of their recent posts was called Bureaucracy is killing people, not bandits, and laments the fact that donations are sitting at the airport and not reaching the people who need it most.  Today, Team Rubicon has managed to treat over 200 people, in addition to the hundreds they have helped in the past few days and are quickly running out of supplies.  Their entire mission is completely privately funded, so they rely on private donations.  Please check out their blog and think about what you can do to help their effort.

The world needs more people like Team Rubicon.  Their entrepreneurial approach to helping people is saving lives, while supplies sits at the airport.  Mark Cuban recently said, “We need people who try to change the game. Who don’t just approach problems with gutless answers.”  He was referring to NBC and the Tonight Show, but I think it really applies to Team Rubicon.  They have changed the game for hundreds of Haitians by acting, not just sitting around.  I am inspired by their work and wish them the very best.  Good luck, stay safe and keep up the good work!